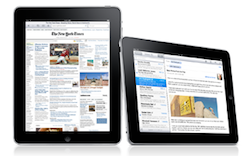 Today, Apple revealed the truth behind the rumors by presenting its new tablet to the world, called the iPad. Probably the worst kept rumor in Apple's history, it's a half an inch thick and just 1.5 pounds, lighter than any netbook. The display is a 9.7-inch LED-backlit touchscreen with a 178-degree viewing angle and a 1024X768 pixel resolution display at 132 pixels per inch making for a wonderful viewing experience, but it's the similarities with the extremely familiar iPhone experience that make it so much more attractive.

Like the iPhone and iPod touch, the iPad has an orientation sensor, which switches between portrait and landscape view automatically. It also sports the same intuitive multi-touch features we've all become so accustomed to using. Wi-fi is standard and 3G network access is an extra feature. It's this last which was pleasantly surprising, not because it was included, but because they chose to offer pre-paid, pay as you go payment plans for the 3G use at $14.99 per month for 250MB and $29.99 per month for the unlimited data. So far, only AT&T is offering the plan, including access to its nationwide Wi-Fi hotspots, but the iPad will not be locked like the iPhone and will use GSM micro-SIM cards so that anyone can use it with their preferred carrier should they use compatible technologies.

All iPhone applications are 100% compatible with the iPad, and can be viewed in iPhone size or in a stretched 2X. Developers are rushing to update for the larger screen utilizing the just released iPad SDK. That means that all 140,000 applications on the App store including your current, favorite iPhone apps will be available instantly for you to use on your iPad.

At its amazing starting price point of $499 for the 16GB solid state model, and with its amazing screen and features, it's definitely superior to any netbook on the market, but Apple decided to clearly show in its announcement that it was serious about the tablet being more than an iPhone by offering a specially-designed for iPad version of their excellent and popular suite of office applications called iWork.

The software normally includes Pages, Numbers and Keynote ($79) but each can be bought individually at just $9.99 for iPad. You can use an intuitive touch interface and the large touchscreen keyboard on the screen to work with the apps, 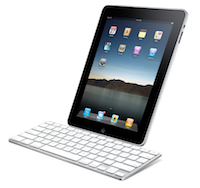 but you can also use the available keyboard dock accessory which holds your iPad like a normal display, charges it, and provides a full size keyboard to work on. The apps can synchronize easily with your Mac and other versions of iWork.

Its simplicity, size, speed, graphics and overall power and usefulness certainly puts other tablets and of course, netbooks to shame, but the iWork and iPhone/iPod connection is what definitely closes the deal in making this a useful and highly desirable, portable product.

In the announcement, Apple also introduced a new application called "iBooks", an e-book reading application and accompanying store. Though Steve Jobs gave kudos to Amazon when it came to its pioneering Kindle efforts, he said the iPad and iBooks experience intends to improve upon the Kindle model.

The software sports iTunes like navigational features making it instantly familiar and accessible. You can touch on the right of the page to turn to the next page, or left to go back. You can skip chapters, and all the expected stuff that goes along with it, but unlike the Kindle, it's fast, and has features only a computer-like display can offer, like color and video integration (E-ink promises color soon, but speed is still lacking), though if it's better to read on than dedicated e-readers remains to be seen.

By applying the weight of their iTunes and App store to the E-book market, Apple is definitely going to make a dent upon Amazon's Kindle store and present strategy, particularly considering the accessible price point at which the iPad is starting. This will allow you to do everything the Kindle, the iPod touch, and some of what a laptop can do in a single, light, and easy to carry device with a friendly and efficient interface connected to the world's most successful online stores to fill it with content.

Out of the park

Though skeptical at first of what Apple would announce as a tablet, and still, questions abound about its inner workings, particularly when it comes to document handling with the work apps and how it will perform in real life, the iPad seems to be an impressive piece of work, a merging of the benefits of a laptop and an iPhone/iPod Touch. At that price point, it definitely surprised every single journalist watching the announcement, as most were expecting something at $1000. The 10 hours of battery life (and days of standby time) were another pleasant surprise (perfect for long flights). With that, the price, and the technical specs, Apple is certainly poised to hit it out of the park.

Will it be as ubiquitous as the iPod or iPhone remains to be seen, but considering the functionality, it will certainly be attractive to road warriors and students, much more than crappy netbooks and Windows-based tablets. It could even replace some ultralights for some users. This will depend of course on the needs of the users, but for the majority of users, the iPad is the glove they've been waiting to wear for years.

And Yet, Still Missing

Multitasking is one of the main features that is unfortunately missing as well as the great oversight of not including a camera for one to do videoconferencing through Skype. The former is mostly inconvenient, but the latter is more of a major downer. Perhaps Apple was thinking that including a camera would hurt laptop sales, and if you ask me, that could very well be true. These two items are the only things keeping the iPad from being the perfect portable device in my opinion, but as I mentioned before, considering what it offers, it certainly seems to be an amazing piece of equipment which will serve the needs of the majority of users in a simple, elegant, intuitive, familiar, useful, and relatively affordable package, an enlarged iPod Touch / iPhone.

Battery and Power
▪ Built-in 25Whr rechargeable lithium-polymer battery
▪ Up to 10 hours of surfing the web on Wi-Fi, watching video, or listening to music
▪ Charging via power adapter or USB to computer system

All available worldwide in 60 days (except for the 3G which will come 30 days after that).
Get more information including the full specs at: www.apple.com/ipad

Posted by Franco Esteve at 6:24 PM

Let me know what you think! :)

Looks brilliant. Perhaps it may be a niche product, but I believe it may be extremely useful for those of us who love the simplicity of the iPhone.

Simplicity is the keyword here,, particularly with those that are not technology saavy. That's where the iPad shines. It's an ridiculously easy to use tool that serves what the average Joe uses a computer for and not what power users or content creators use it for. :)