After six years of waiting, Dan Brown certainly doesn't disappoint with his latest Robert Langdon adventure, The Lost Symbol. This time around, Mr. Langdon finds himself involved in a whirlwind of Masonic symbols, rituals, conspiracies, legends, etc., all within one of the greatest Masonic monuments in the world, which also happens to serve as the capital of the U.S., Washington, D.C., turning what might be construed as a beautiful, yet ordinary capital city (at least to a lot of americans accustomed to seeing it often) into a sprawling temple dedicated to the elevation of men and women to their maximum spiritual potential. 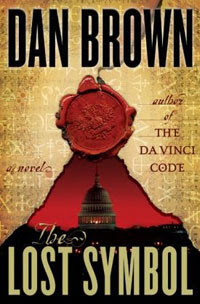 Though often criticized by his peers for the low quality of his writing, or for the inaccuracies of his facts by detractors against the theories and ideas his novels portray, eighty million readers of The Da Vinci Code have given their approval to Dan Brown's style and capacity to weave an interesting story. If nothing else, Dan Brown can bring complex philosophical ideas, throw them together in a highly entertaining way, and create a thriller that is accessible to the masses, yet intriguing enough for the knowledgeable. He has a way of stimulating learning and the exploration of subjects that are often unknown or inaccessible to the majority of the populace. He entertains and informs in the most spectacular and thrilling of ways, with twists and turns that will both shock and delight while simultaneously moving readers to explore the subject matter, locations and overall details presented throughout the story. Let's just say that you'll be immediately searching for Noetic science upon finishing this wonderfully fun story.

The Lost Symbol is not high art, but it's not supposed to be. It's a highly entertaining page turner, an engrossing thriller that will keep you glued to it from cover to cover. When it seems it might be predictable (and truthfully, I must say that it doesn't stray too far from his previously established formula from The Da Vinci Code and Angels & Demons), it changes, it surprises, it shocks, making it a worthwhile read and a welcome addition to Robert Langdon's collection of adventures. The story accelerates at a dizzying pace all the way to its revealing end (Sorry, that's about it. You'll find no spoilers here), and as in his other books, his research and references make you want to seek out more information about the subjects presented. There are many wonders in Washington, D.C., as it has always been an intriguing and fascinating city, but after reading The Lost Symbol, you'll certainly want to look at it again, but through the new eyes that Brown has given you. Like the cities presented in his previous books, a new world is revealed beneath the simple tourist attractions we've all come to think we know so well. The U.S. capital has never looked this mystifying. and it's all been there all along for the world to see.


Article continues below the following preview for my latest photography book, Franco Esteve's Devils Within. Buy it Today!


In essence, Dan Brown has written yet another easy to read, highly intriguing, hugely fascinating, and absolutely engaging thriller. If you are looking for something interesting and entertaining to read, The Lost Symbol will certainly not disappoint (Da Vinci Code fans will most certainly be satisfied), but if you're looking to read Shakespeare, you're better off reading the master himself. The Lost Symbol, like The Da Vinci Code and Angels & Demons before it, follows along the line of the fast moving thriller novel, but also pushes it beyond with its mesmerizing, real world details and complex and mysterious subject matter. I for one thoroughly enjoyed it, and highly recommend it.