Today, bNowhere has received a number of patents for the bathroom process. This includes patents for the method of urinating both standing and sitting at both urinal and toilet, the process of defecating in a toilet and urinal and in multiple positions, plus, the same process specified within the constraint of clothing, bedding and other situations. Starting immediately, everyone found doing such acts must pay bNowhere a licensing fee.

Sounds completely idiotic doesn't it? Well, something similar has been happening in the computers and software industry for the past 20 years, and is an issue that continues to rear its ugly head every number of months at different scales. 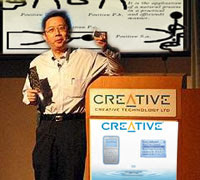 The most recent example is Creative Technologies, makers of the Zen mp3 player and number 2 competitor in the portable mp3 player market. That specific market is presently dominated and by no small measure by the ubiquitous Apple iPod in all its forms. Apple holds between 75 and 85 percent of the mp3 player market depending on who you ask, and Creative is one of many fighting for the rest of the market and a bite of the Apple pie. In fact, Creative's Chairman and CEO, Sim Wong Ho has been adamantly vocal about his company's "war" against the iPod since November of 2004. 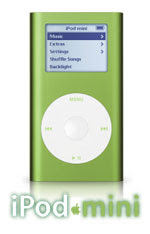 Despite his claims and efforts, Apple sold over 6 million iPods in the last quarter, an over 600 percent improvement over last year, and Creative can barely sell those numbers in a year. Of course, desperate times call for desperate measures, and with the help of the government many companies have attained the means to fight the "war" with weapons that are as ridiculous as the bathroom example above. Creative's particular weapon is the recently acquired U.S. Patent 6,928,433 referred to as the "Zen Patent". This patent describes how files on a digital music player are organized and categorized hierarchically. In other words, the patent is the equivalent of inventing "alphabetical order" since it gives Creative a 20 year, government sponsored monopoly on hierarchical organizing of files in an mp3 player by song, artist, genre, etc. Anyone who's used an mp3 player, be it Apple's iPod, the Rio or any other brand than creative will logically find this browsing method familiar. Then again I should say that anyone who's ever classified music should find this familiar which makes all of this laughable and though normally considered unpatentable, here it exists for all the world to pay Creative for the right to organize the files in their player in the same way as their home CD collection.

Another controversial example in recent years was Amazon's 1-click® patent. On September 28, 1999 the U.S. Patent Office granted Patent Number 5,960,411 for a "Method and system for placing a purchase order via a communications network". In simple terms, Amazon patented the process of shopping used by most websites. The system receives a click, and processes an order for an item based on personal data previously stored on file that includes credit card and shipping address. Amazon defended its "innovation" saying that no one had thought of 1-click® shopping, and yet reducing clicks has been at the top of every webmaster's list since the beginning of the World Wide Web. The storing of personal information and using it to present data isn't anything novel either and is ridiculously obvious. It is the same as walking into a store, grabbing some stuff and telling the clerk as you leave, "Put it on my tab, Earl!"

Certain things can't and shouldn't be patented, yet the U.S. Patent & Trademark Office is awarding patents to everything and anything on computers and software. Their cluelessness and overall ignorance when it comes to online issues has resulted in a new form of defeating the competition, patenting their obvious processes.

Now you can patent the "Method and system for placing a mouse in a trap" and upon receiving said patent, all mousetrap manufacturers will be in violation of your patent and therefore subject to an injunction unless a licensing agreement is reached. It's exactly what Amazon achieved when it was awarded an injunction to Barnes and Noble's online store for their Express Lane system, and right before the critical holiday season. It was eventually resolved with a second, confirmation click, but it achieved the purpose of defeating Barnes and Noble in the online space at a very critical time. Is this the ethical way to compete? Should this be allowed? This has far reaching effects upon the economy, businesses, innovation, etc. and none of them pretty.

It used to be that to compete all you had to do was build a better mousetrap. Well, no more, now you don't have to build anything, just own the patent to the idea. It is a sad day for business, a sad day indeed.

Final Note: an untold number of patents were unknowingly violated in the writing of this article. ;)

Throughout the ages, society has dreamed of immortality and more particularly the reversal or at the very least the delaying of the aging process. There have been many books and movies on the subject and science has explored it ad nauseam with limited to no success. Sure there have been products which hide the process but none that truly slow it down or reverse it.

Science seems to have finally made a breakthrough, and it proves that "There can be only one," with no children

The Highlander movies and TV series promoted the concept of immortal sterility to deal with the controversial subject of immortals fathering children throughout the ages. 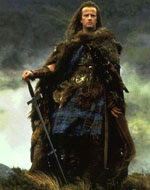 We have been fascinated by these movies and concepts and have discussed their ramifications in forums both public and private. There are many negative points to an immortal society and even to a single immortal living amongst us. Immortal sterility seems like a good work around at least from a fictional point of view but if you look at the latest discovery, it may have been right on the money.

There is as protein that was recently discovered which extends the life of male rodents by 31 percent and females by 20 percent (sorry girls) if produced in large quantities. It was named after the Greek goddess Klotho to reflect the nature of fate and the thread of life which she was said to control. Klotho commands the production of insulin which controls blood sugar and when produced in large quantities it produced the life extending effect.

What does this have to do with immortal sterility you ask? Well, as it turns out, there are some negative side effects to extending life in this manner, one of which is the disappearance of reproductive instincts. Longer life in this particular case equals no desire for sex and therefore no offspring. Another negative aspect of a higher level Klotho is the higher risk of developing diabetes due to the insulin levels affected by the protein. Though the discovery is a great advance, it still has a long way to go in our never-ending search for immortality or at the very least an extra twenty years of youth.

"There can be only one," sucker born every minute

Cryonics, the "science" of freezing people has existed since the 1960s and has been successful in freezing living organisms. 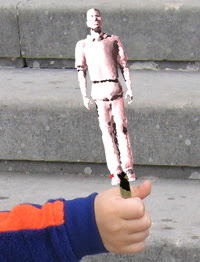 It has become a lucrative business which promises to bring people back from the dead when their particular disease can be cured or their aging reversed. There are a number of issues with this procedure, some technical, some biological, some moral, and some just plain stupid, but as P.T. Barnum is credited as saying, "There's a sucker born every minute." Still, bioengineers believe that by the year 2040, they might be able to construct nanorobots that could restore cells and rejuvenate the body, though it is still debatable whether the brain survives the process and the ten percent degradation that occurs during the thawing process could be reversed before it kills you (again).

This particular branch of science is not without its own number of folklore and urban legends, one of which includes Walt Disney's existence in cryostasis, but legends aside, it continues to be a fascinating subject despite the ridiculousness of its present day promises and the unending questions which surface on all aspects of science, philosophy, spirituality, etc.

In the end, does being in a freezer equate immortality? I think not.

"There can be only one," mutant

Applied genetics on the other hand seem a more practical way looking towards the future, particularly when you consider you don't have to die to become immortal and sex is still a healthy part of your life.

Through stem cell injections and genetic manipulations, this branch of science promises to turn us into the equivalent of Marvel Comic's X-men, a bunch of mutants that look like Hugh Jackman. 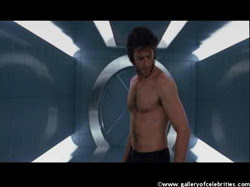 Well, not quite, but certainly resistant to viruses, diseases, radiation, excessive toxicity and even aging and possibly death. Some of the steps in that direction can already be seen in birth manipulation and though the Human Genome Project is a bit of a disappointment in regards to the actual percent revealed (20), it will certainly aid the goal of improving the healthy duration of our lives if not through the extension of youth.

This particular branch has been at the forefront of debate in recent years and seems to be the one drawing out the most scorn from moralists, christian conservatives and even presidents including Mr. Little Tree himself. Scientists believe in logical and empirical evidence that points to evolution and the natural mutation that made us humans, so for them it would seem logical to use our given talents to help the process along for our benefit.

Despite the controversy and the popularity of fictional stories with names like "Creationism" and "Intelligent Design" which place humans and the Earth at the center of a universe created in six days, applied genetics seems poised at the forefront of our immortality. Whether we end up as X-men, Highlanders, Androids, or popsicle sticks, the time will come when aging has aged. I for one can't wait.