Apple hurts users and developers by removing iOS from iTunes

Apple has the tendency to develop new features and to explore new ideas by cutting with the past. This has been extremely useful and innovative and has moved technology and our use of it forward, but it’s always left me with a bit of a sour taste in my mouth when each step removes useful features that were actually practical AND popular. It’s like they can’t add something without taking other things away.

iTunes has historically had a love-hate relationship with its users, who use terms like bloatware, slowware, bugware, shit, crap, and all kinds of expletives to describe it. It’s understandable. As something that started as a basic database app to store your music and synchronize it with iPods, hence the name, iTunes had become a be all end all database of media management to synchronize with a huge number of devices, modern and legacy, bloating its size and turning the app into its own operating system that includes music, movies, tv shows, podcasts, books, university courses, audiobooks, ios apps, etc. It’s a player, a file manager, a hardware interface, a synchronizer, an all media store, and now, a streaming music manager and interface.

Throughout the years, Apple has both succeeded and failed in its attempts to streamline and control the interface and functionality of the app and store. It removed books from it when it created the iBooks app and the iBooks section of the store with it. It didn’t even bother to include a Mac App Store, making it a separate, and in my opinion too limited, app. And now, it’s removed the iOS App Store from it.

You might think this is great, removing all that bloatware and being truer to its original intent of a “tunes” player and manager. On the surface, it seems great to push iOS items to where they live, iPhones and iPads, leaving the Mac free to be the Mac, and iTunes to be the Tunes player it was meant to be. Unfortunately, the removal has greater consecuences and affects the iOS ecosystem in a major, extremely negative way.

Unfortunately, the removal has greater consecuences and affects the iOS ecosystem in a major, extremely negative way.

How it hurts iOS users

Apple had removed books from the store, sending the store into iBooks, but they had been intelligent enough to keep books in the search results, in order to capture those impulse purchases from cross searches. With this latest update, that’s just gone for both apps and books, so that usability and convenience has been removed. Now, you have to browse for apps on your tiny iPhone screen and have to go to four different stores to browse for the items they sell. But that’s not the worst of it.

How it hurts iOS developers

One of the coolest features of the iTunes desktop store is that it allowed the “install everywhere and from anywhere” feature. You could browse using the big and comfortable desktop app, click to buy and have it automatically installed on all your devices. Better still, you could land on a developer website and click to install their app from the browser, which would take you automatically to where you could instantly buy and install their app on your device, all through the magic of desktop iTunes. The removal of that particular benefit and seamless usefulness not only makes for a lesser user experience, but it kills developer sales by killing instant conversions/impulse purchases. 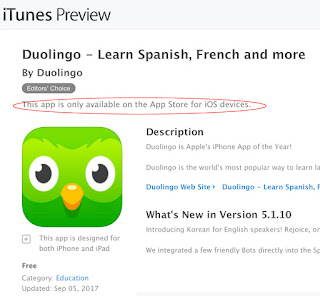 Let’s look at an example. I’m on my Mac and get an e-mail from a client in Russian. I use a translation site to read it, but I want to learn Russian, and so decide to do an online search to learn Russian. Duoling comes up as a free, useful option. It’s a free app and looks great, so I click on the “Get on iOS icon”. This takes me to Duolingo’s iTunes page. Before, it would automatically open it in the iTunes store in the iTunes app for me to impulsively click on it to get it, which would automatically install it on my iPhone. Now, it goes to Duolingo’s iTunes page, but I can’t do anything with it there. I have to go into the iPhone, open the App store, search for Duolingo again, look for the correct one, and click to download and install it.

That kills the user experience, and makes it a lot more difficult for developers to get people to install their apps and make money. Every step, every hoop you have to jump through makes it more difficult. It used to be seamless, now it’s not. Was it so difficult for a 250 billion dollar company to maintain this simplicity? Was it really so expensive and impossible to maintain that simple, seamless experience on the desktop that has benefitted iOS and made it so popular and excellent?

Of course, Google and their Android OS copied that iOS functionality, improving their user experience no matter your device. As a Mac/iPhone user, I should be used to Apple’s game of give and take, but I’m not. I guess it’ll save me money in the long run, though, as I’ve already skipped a few apps I would have bought on impulse. Thank you Apple.

As for iOS developers, sorry, but you’ve just been Applefucked… again.

Posted by Franco Esteve at 4:36 PM No comments: