One Thursday Night of Winter

1:30 am. Thursday night. Spring had shown it’s face but a few days before, but winter had returned. Still, the sky was clear and the air fresh. A quick glance around revealed no one. The street was free of movement. The city was sound asleep. I crossed the first side street, suspiciously observing for any signs of life. Too many years living in dangerous urban jungles had made me paranoid. Continuing, I could observe that most of the surrounding buildings had gone dark. I arrived at the next side street, which was perpendicular on the right side, but I stayed on the left. I could see the main road at the far end, but all seemed quiet there as well. 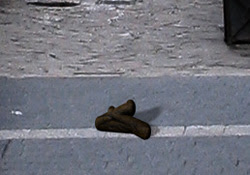 Arriving at the next crossroads, I remembered earlier in the day as I went by, I had observed an unusually large pile of fecal matter which I would assume was produced by some enormous creature. Glancing over at the side street on the left side, there it was, right in the center, and despite the fact that someone had actually slipped through the right side, spreading its soft, tanned interior over the asphalt, the multileveled, deep black colored, monument to excrement remained erect maintaining its wonderfully layered, pyramidal shape. The damage had only served to enhance its image by smoothing the right face of the monument.

I finally reached the main intersection where the street connected to the diagonal main. Curiously, each corner harbored a banking institution. My interest was on the opposite side of the oddly shaped intersection. I jumped to the center of the road, seeing as there were nothing but ghosts lining the sidewalks and ectoplasmic images of carriages riding down the road. I hurried over to the cash machine, carefully studying the surrounding area for movement. The machine was encased in a phone booth like, glass structure, its door capable of locking you inside for everyone to see.

I ran inside and slid the latch, locking myself inside. Looking around, I could see that it was safe, but nevertheless, I carefully and hurriedly pulled out my wallet and, after selecting the correct card to use, slipped it into the machine. Less than a minute later, I was pulling the card out, cash in hand, the machine logged out, and waiting for its next customer. After tucking all items safely away, I began my examination of the surrounding area.

Every direction seemed clear, the air silent. Unlocking the latch, I realized that there were what seemed to be vehicle lights illuminating the parked cars right outside the booth. Upon closer examination, I noticed a taxi approaching from the left of my exit. Nothing suspicious there.

I lifted the latch and opened the door, stepping out into the sidewalk. The taxi stopped at the intersection, as another came from the bottom of the main. After carefully following the street signs, they both continued on their way, and I took advantage of the movement by rapidly cutting across the center to retrace my steps back to my point of origin.

As I approached the first intersection, the one where the pyramid stood in the center of the side street, now on the right side instead of the left, I noticed someone was walking down from the main. I slowed my pace in order to be able to examine whoever it was before running into them. They hadn’t noticed me yet. It was an old man, probably around seventy years old, but looking hip in his black leather jacket and black beanie like, wool headgear. You could say he looked like a stereotype thief from about forty years ago, except old and out of shape.

He crossed the street in front of me, casually swinging a boutique shopping bag on his right hand. His awareness was not surprisingly dull as I approached without notice. As he continued I remembered the monument and wondered what would happen since he seemed to be particularly oblivious to his surroundings and was heading straight for the land mine.

I had reached the corner and was beginning to cross behind him. The two were very close now, very close. His mind swam in his own thoughts, for he had yet to notice the gargantuan pyramidal monument, that beautiful onyx structure so carefully laid in his path by a creature with an extremely efficient digestive system and a careless nature. I waited. I had to see. I had to see what would happen. Would he notice? Would he hit it? Worse, step on it? Then again, he would have to practically march in order to straight step on such a large structure.

He continued his approach, and I decided to slowly move in my own direction so as not to be noticed and accidentally startle the unsuspecting victim soon to be covered in soft, black and brown, organic tissue, preventing my witnessing of the event. His feet were getting closer and closer. He did not waver from his path. Here was a man with a purpose, though for the moment, his purpose would be my momentary entertainment from an accidental gag moment.

I had reached the next corner and was ready to continue as he finally reached the structure. For a split second, it seemed he had noticed it and had moved his feet to avoid it, but he hadn’t, straightening his path and beginning his journey over it. His left foot glided smoothly and safely over the monument without damage, and I truly thought he would clear it, safely and surprisingly, without notice. We can thank his right foot for the brilliant rescue of this spectacular moment in the life of this man, a human moment, a personal moment.

His right foot lifted, and as it began its trip around the imaginary arc towards the next step, it slammed straight into the upper front side of the structure, slicing the top off and moving it at speed in the direction of his left foot, slamming into its side and decorating it with a trademark brownish color. He stumbled, digging his foot further into the pyramid, breaking deeper through the black, tough exterior and into the softer, lighter colored tissue. The mound was breaking on all sides and both rolling away and collapsing into the sides of his ankle.

He recovered himself quickly and looked back angrily, as I dashed away attempting to retain my laughter within myself and remain undiscovered. I continued to walk and after a few meters my insides burst into uncontrollable laughter. I thought about how cruel it was to laugh about such an unfortunate accident, and particularly one I myself would have been furious about. I tried to control myself, to no avail. In fact, the more I tried, the further I tumbled into an abyss of hilariousness, my body convulsing and mouth bursting with laughing sounds.

After reaching my point of origin I pondered upon my journey, one final paranoid glance before opening the door, and thought, how curious it was, my city, at 1:30 am on a Thursday night of winter…how curious…indeed.

Posted by Franco Esteve at 8:52 PM No comments: