Nudists: The Frontline of Defense

Early this past summer, I went down to a paradisaic beach at a famed resort destination in Europe, laid out my towel and suddenly noticed the hairy, nude ass next to my face thinking that perhaps, that was not how I had envisioned my paradise beach moment. This kind of thing is obviously not common in the U.S., as it can only be done in the privacy of one's home or specialized, controlled locations (read PRIVATE), so it's not something I'm used to. Of course, on occasion one might find oneself on a U.S. beach looking at practically the exact same thing, except for the dental floss between the cheeks, but never totally nude.

As my eyes and mind adjusted to the reality next to me, I began to study my surroundings more carefully. It seemed I had stumbled upon and chosen to bathe at a nudist beach. Bare bodies were everywhere. As they were born, there they lay, swam, walked, and played. For a moment, I contemplated whether I may have been overdressed for this particular location, but I wasn't the only bathing suit clad being at the beach. Here we found ourselves mingling unabashedly and uncaring of each other's presence or chosen attire. There were all types of people, wearing every level of coverage, from full to none. Why didn't anyone care? Why didn't anyone stare or gawk at those who dared to play so freely? Why are we so shocked by nudity, by our own birth clothes? by our own bodies? Worse still, why are we offended by it? In a country that prides itself on liberty and freedom of expression, why are we so repressed?

Other countries obviously don't see it the same way, considering my experience at that beach. There seemed to be some informal segregation at other beaches though, where you had the nudists mainly sticking to one specific section of the beach. This seemed to be more because of the nudists' own preference than that of the clothed bathers. Is our nudity such a bad thing? Are we so wretched a creature in our own skin that we must not allow anyone to be seen in it? If this is so, if this is so immoral, then why are we born this way? 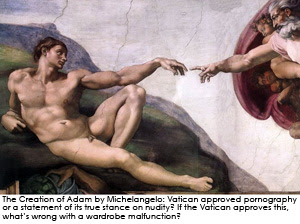 I've heard a number of so called christians in the U.S. claiming the immorality and sinful nature of nakedness, and yet, their holy books, their word of god, says nothing about clothing or nakedness being wrong. The Vatican, the Catholic Church's own bastion of holiness, is covered in nakedness. Naked bodies cover many of its walls, ceilings, and hallways. Many of its images are naked. So what's all the fuss about? Where's the offense? Did their god not create them naked?

I was watching a news broadcast where they interviewed a woman who was in favor of banning nudists entirely in Europe. She said that it was offensive to her children, to their sensitivity. Were her four year old and six year old children no longer innocent at that age that they saw the nakedness as sexual, immoral and offensive? How did they become this way at such a young age? Who took away their innocence? Their nakedness? They see breasts as food. They're still discovering themselves, the world. Their parents fight with them to clothe them. Their awareness of nakedness and its corresponding offense is a learned behavior.

The woman was adamant about it and her neighbors were clamoring to start a ban at their local beach, which everyone shared freely for as long as anyone could remember, clothed and unclothed, with no complaints. Sure, not all naked bodies are what one would call attractive, but in this age of political correctness, do we dare hold it against those who were unfortunately born with a not so favorable figure? Perhaps the naked folks reminded this woman of her own ugliness, of the darkness of her thoughts, her lost innocence. Shouldn't someone have called social services and removed her children away from her corruption, her disgusting view of our own natural state?


Article continues below the following preview for my latest photography book, Franco Esteve's Devils Within. Buy it Today!


The U.S. is repressed enough. Hell, look at all the hoopla about a "wardrobe malfunction". But if Europe begins to head in a similar direction, will we then be all wearing burkas in a distant future, offended by our image in the bathroom mirror, offended by our having been born naked? Perhaps someone will develop a condom like apparatus to cover our bodies as we exit our mother's womb. I'm sure that would please quite a few people, especially the woman in the broadcast or some other "religious" folk. We need not be offended by how we are born. We need not be offended by our nakedness. One should really look at the reason why one feels this offense before trying to repress other people's freedom and lack of insecurity about their bodies. Those who dare go out naked in public are normally outside society's definition of perfection, so one can't claim that they're sure of themselves because they have perfect bodies. How can they have such a sense of security about their bodies, about themselves? How can they dare to show themselves to the world?

The U.S., that great bastion of freedom, loves to control that so called freedom and box it into locked spaces where no one can see it or experience it beyond what society (and the government) dictates. Its nudists, like native americans and other classifications before them, exist only in "reservations", called nudist colonies, camps, areas. Society boxes them in, labels them perverts, immoral, pedophiles, sinners, corrupt, pornographers, etc. It's a crime. You commit a crime, which means you are a criminal, should you find yourself "exposed" (read in your own natural skin, your body, something you can't get rid of or away from) in public. Who is the corrupt, sick, pedophile, immoral pervert? A person who walks around naked? or the one who looks at him and whose mind is dirty and judges him as such? Are you a pervert because you're naked? because you're unashamed about what your god decided you should be born with? Perhaps it's the one who saw the person's nakedness as something sexual, sick, dirty, corrupt and sinful. It is that person who would take away your liberty and your freedom to cover up his/her own mental illness. 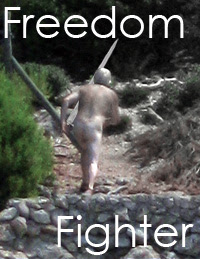 Freedom is something that is very hard to come by and very easy to lose. If you take one out, others follow quickly and with great ease. So as I pondered upon those people on the beach, I couldn't help but look at them in a new way. I couldn't help but see them and think of them as something much more than nudists enjoying paradise. I began to see them in a new light. Their nakedness was their weapon. Their nudity was their bullet. They were fighters in a grand war, a war that has been fought since the beginning of time, a war for freedom. Their quiet statement, as small as it may seem to many, is a major battle for our bodies, for society, for the freedom to exist as we are, for the freedom to live freely beyond the simple nakedness of ourselves. In Europe, if nudity goes, toplessness will follow, and the government will soon be telling you how you can dress on the street, in your yard, in your house. In the U.S. we're not that far off from that (though improving in some areas), but should their freedom to be naked disappear, should nudists be unable to find themselves nude in the openness of even those separate "reservations", it will be one freedom closer to losing another, and another.

It's bad enough as it is with Big Brother keeping such a close eye upon our lives, we don't need to give in our bodies and ourselves to further scrutiny, to further repression. The nudists are our unsung heroes, our warriors on the front lines. They fight when we dare not. We dare not go naked into the night, into the fight. They dare. They go. They live… free. They're free so we can be.

So I looked around the paradisaic beach and thought that perhaps this was my paradise beach moment after all. Perhaps I should make their freedom mine. I stood up, undid my bathing suit, and as I was ready to bare it all to the world …

…I decided to thank every one of them instead, our heroes, our frontline of defense: the nudist.

Nudist Organizations - Fighting for all of us and improving our freedom in the U.S. and beyond

You'll find accurate information about going nude in America (and around the world) in any of the following websites:

*AANR: American Association for Nude Recreation - AANR is the oldest and largest organization of nudists in North America with 50,000 members and more than 200 private clubs, RV campgrounds, travel clubs, and resorts, each offering a wide variety of recreational activities.

*The Naturist Society: The Naturist Society has been a leader in promoting body acceptance through nude recreation for more than 15 years. During that time, the 20,000-member organization has also been a staunch supporter of our right to use appropriate public lands for clothing-optional activities.

*AANR FLORIDA: American Association for Nude Recreation for the Florida region. Areas covered are Florida, Mexico, and the Caribbean.

*British Naturism: The UKs only International Naturist Federation (INF) member and in existence since 1964, it exists to unite and support naturists, to protect naturist places and provide more, make social nudity more acceptable across the UK and to provide comprehensive information on naturism and naturists around the world.

*The Fig Leaf Forum: A site specifically designed for Christian naturists/nudists. Their information is both general and focused for those who are religious and are curious or wish to go nude but don't know whether or not that is in conflict with their beliefs.

*The World's Best Nude Beaches and Resorts: The long-awaited sequel to New York Times bestseller The World Guide to Nude Beaches and Resorts. This guide unveils the top 1,000 places where bare skin is simply the most fashionable thing to wear. More than 50 countries are explored in depth, including the US and Canada, the Caribbean, France, Spain, Italy, Greece, Portugal, Croatia, the UK, Germany, the Netherlands, Scandinavia, Australia, New Zealand and Latin America. Don't get undressed without it!

*Naturism: Wikipedia entry on the subject of Naturism, the cultural and political movement advocating and defending social nudity in private and in public.

*True Nudists: True nudists is a FREE online community for naturists worldwide. We are the number 1 resource for nudist resorts, nude beaches or nudist friends in your area.

NOW at the bNowhere Signature Store at Cafe Press you can find products with designs related to this article. GET THEM TODAY!!!!

Posted by Franco Esteve at 8:59 AM