This has got to be the beginning of the end for "American" society. The new Herbie movie, the fourth sequel to the classic 1968 film, The Love Bug about a Volkswagen Beetle car that is "alive", features Lindsay Lohan, the well bodied teen actress who has become a sort of breast icon for millions of teen fans as well as a number of more adult followers. In a yet to be understood social twist, Disney technicians were forced to digitally reduce her breasts throughout the film as their size was deemed "offensive" for a film geared towards children.

Now, this has got to be the most mind-boggling piece of news I've read in years. How can breasts, something you suck as a child, be offensive to children? Could it be more likely that it offends the adults that feel tempted by Lohan's natural beauty or those women that feel envy towards her biologically endowed demeanor? Breasts are breasts, nothing more, nothing less. It is something that women have, biologically built into their bodies. It is something that serves the singular purpose of providing nourishment to a newborn child. Unless the movie's storyline or directing features Lohan's breasts in depraved sexual acts with other children, I don't understand the offense. Do her breasts fire missiles like those of the classic japanese cartoons, which no parent complained about? 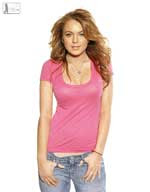 It is important here to note, who is the one being "offended". It isn't children. Children couldn't care less. In fact, young girls are often uncomfortable with their new endowments, and in fact, find them uncomfortable when they are large particularly if they're active in sports or in outdoor activities. Male children have more of a curiosity about them than the depraved sexual interest adults are quick to assign to them. If "Americans" were wondering why the rest of the world mocks them and thinks of them as ignorant, culture-less children, well, here's yet another perfect example. This is the result of "America's" obsession with sexuality, it has depraved their judgment of any sense of coherence.

Article continues below the following preview for my latest photography book, Franco Esteve's Devils Within. Buy it Today!

On the one hand, we sexualize children, and on the other we complain about the sexualization. It has become such an obsession, this infantile world, that society in general has become disconnected with the true reality of growing up. A child is as capable as is his/her potential, and it is adults who remove the so called "innocence" by assigning value and importance to things that are both natural and unimportant to the child. It is adults who are depraved. If you are offended by Lindsay Lohan's beautiful, god given form, and think it is wrong and sexually offensive that her breasts should naturally bounce when she runs, then it is you who are the depraved, sick bastard who is obsessively sexualizing something that has nothing to do with sexuality.

Sadder still is that Disney would follow suit with the digital reduction and cover up, by reducing her breasts by two sizes and raising the necklines on her clothes. Disney, the company that puts out children's films that explore such lovely children's topics as revenge, violence, lust, obsessive desire, envy, etc. etc. If you're wondering which films I'm talking about, then here's a short list: The Lion King, The Humpback of Notre Dame, Snow White, Mulan, etc. etc. It is here that a perfect example of the social issues that plague modern society surface when it comes to sexuality. It is ok to kill, maim, dismember (as in Star Wars films), and commit devious violent acts with dubious morals and consequences, but don't ever dare to show a breast, or anything to do with our biology, lest it be the greatest offense to society and the fall of our high moral structure. Food for thought? I certainly hope so. 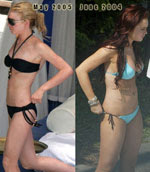 In the end, Linday Lohan no longer has those "offending" breasts, since she has become too anorexic recently to have any breasts. Perhaps that's why Disney is reducing them, to better reflect the current Lindsay and maintain the actress recognition level with audiences. As Jon Lovitz would say, "Yeah! That's It!"