According to Microsoft the Xbox 360 launch was a huge success, even though the U.S. and Europe, two regions in particular that really wanted to purchase the 360, were left without machines enough to even fill prepaid orders, and Japan, a country that couldn't care less, had more than it could ever want and then some. It had been rumored that supply would be constrained during the launch and that it was a Microsoft conspiracy to appear to have sold more than it had. It would have made sense from a certain point of view to have all stores saying they "sold" out of their 360s, appearing as an extremely successful and desirable product, but considering the holiday rush to buy one, it was more likely that they simply weren't prepared for the launch, wanting so desperately to get a jump on Sony's Playstation 3. This seems to have been proven as all throughout the holidays you simply couldn't get one, and the large video game store chains were left without product to sell, some of them fulfilling pre-orders for the 360s this month and the next.

So, considering this is well known, why am I revisiting the conspiracy? Well, a little explanation first, for those of you who have no knowledge of how the video game industry works. Video game console companies like Nintendo, Sony, and now, Microsoft lose money on every single console that is sold. That's right, they sell the consoles much cheaper than the price it takes to make them. The reason for this is that in order to lure a critical mass of gamers you have to have a very powerful and competitive console within a reasonable price range. The reason you need that critical mass is because that mass will spend all their money on buying the extremely profitable content that will play on that specific hardware (i.e. video games). The other moneymaking area is peripherals such as extra controllers, remote controls, memory cards, etc.

This new Xbox in particular is extremely expensive to manufacture, considering it has the latest and greatest next generation components within it. So, Microsoft, in order to attempt to gain the critical mass, divided the product into 2 packages: Premium and Core. 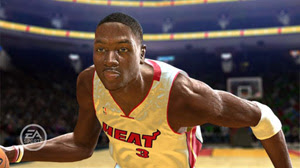 Both packages include an Xbox 360, a controller (the premium having a wireless controller), and a cable to connect the box to the television, but only the Premium brings a connector that can take advantage of the 360's advanced high definition graphics (an RGB component cable). For the Core system you pay what seems like a reasonable and accepted standard price for the latest and greatest, $300 USD. The Premium system costs $100 USD more, which at first may seem like a lot, but you also get more than your money's worth in return. This is where the conspiracy begs to be revisited. The Premium system is a money loser as it comes with the much more expensive wireless controller, a 20GB hard drive, a headset to be used with the incredibly well designed and structured Xbox Live service, the RGB component connector, and an Ethernet cable to get started online right away. This compared to the Core, which only has the console, wired connector, and crappy composite TV connection. The additional components if bought separately, command an incredible "premium". The hard drive alone costs $100 USD, and is REQUIRED if you wish to play old Xbox games or use most of the best features (i.e. Xbox Live!). Be prepared to pay an additional $200 in peripherals if you bought the Core system. It seems like a no-brainer that the Premium system is the one to buy, except, there are NO Premium systems available, only Core systems.

You can actually walk into a store and purchase a Core system. In fact, they'll even have a few in stock. If you want to buy the Premium system, good luck on E-bay paying a few times the price as they are nowhere to be found. Of course, the store will happily sell you the Core with the peripherals necessary to make it a Premium system, and this is where we revisit the conspiracy theory. Considering the amount of money lost on the consoles, could Microsoft had purposefully manufactured a limited supply of Premium systems in order to force sales of the highly profitable peripherals?

In the end, it's Microsoft's battle to lose in this major screw up of a launch the second time around. You'd think that they would have learned something, but it would seem they didn't. The truth of the matter is, that splitting the console packages in two has forced developers to limit their games to the lowest common denominator and therefore will be unable to truly take advantage of the high-end features of the console. 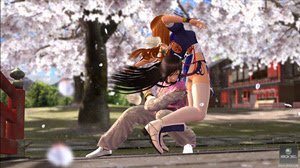 This was a very bad call. The peripherals are in extremely short supply as well, which equals lower sales overall and unhappy customers. The loyal fan base which preordered the machine got shortchanged by being un-served, undermining both themselves and the whole preorder system of many retail outlets and chains across the world. The games are nowhere to be seen with no clear "must have" title and in fact, the same titles that sell in other platforms sell at a premium for the 360. The titles don't offer a clear reason to pay $10 to $20 USD more for the exact same game. Sure, the graphics are better, but they're not a significant improvement in some games to merit the extra charge. 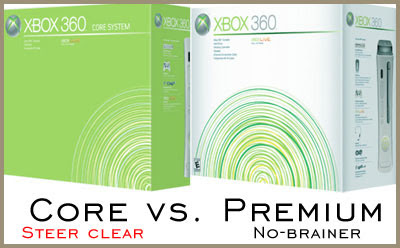 Sony will be launching their Playstation 3 in the spring of 2006, and all the demos have so far impressed. They seem to be poised to have a few "must have" killer apps at launch, and will include the next generation blu-ray DVD reader, which will allow you to view all the High Definition DVDs that will be coming out in that format throughout the coming years. Considering their overwhelming dominance of the market, it will certainly be difficult to beat this wonderful, next-generation hardware. Let's see if Microsoft's head start, despite their mistakes along the way, helps them reach an even greater foothold than the last round. We must also not count out Nintendo's revolutionary new console, the Nintendo Revolution, which will bring back all the games of old from their immense library of classics as well as some next-generation beauties.

For those of you wanting a 360, buy the Premium system, and for those looking for games to play on it, look for the only available titles for the cutting edge. Otherwise, steer clear and look for the original Xbox format as your new machine is backwards compatible, thanks to your Premium system's hard drive (required). Enjoy.