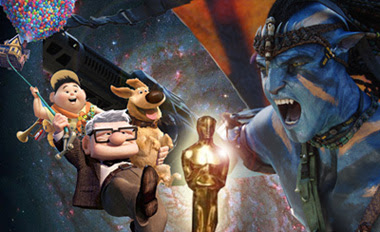 The Academy Award nominations for 2010 have been announced a couple of hours ago, and though many were unsurprising, the nomination of Walt Disney's Pixar Animation Studios' film, Up, for Best Picture was definitely unexpected as the Academy has historically ignored animated films for the Best Picture Oscar relegating them to their specific format category, the Best Animated Feature Film Oscar. Pixar had been coming closer and closer to this honor, yet, despite the staggering amount of awards their films had received, it seemed they were never deemed enough when compared to live action films as it pertains to the Best Picture Oscar.

Other nominations for the film include Best animated feature film, Original score, Sound editing, and Original screenplay making for a total of five nominations for the movie. Despite the wonderfully touching story of the film, I would not expect it to win the Best Picture Oscar, but for it to receive the Best animated feature film award and perhaps one of the others. The honor of the nomination alone is impressive, but considering there's a specific category, it will be difficult for Up to achieve the Best picture recognition, though not impossible considering similar cases with the Best foreign film category.

Another surprise is the amount of nominations for District 9, also including a Best Picture nomination. I must admit that the film was very fresh, current and overall excellent, but to see two science fiction films and an animated film nominated for Best Picture is definitely rare. As a fan of both science fiction and Pixar's animated films, I'm definitely glad to see them getting such a level of recognition.

And then there was Avatar

Avatar didn't quite match its Dances with Wolves (12 nominations, 7 oscars including Best Directing and Best Picture) inspiration when it comes to nominations, but nine nominations is certainly impressive and includes the two top honors of Best Picture and Best Directing. It didn't get any for acting though, which is not surprising considering the effects driven (read animated) nature of the film.

That Avatar would get nominated was not surprising, particularly in the more technical categories, and though expected by many for Best Picture and Best Directing, I'm glad the Academy members saw through James Horner's rehash of Titanic's original song and didn't honor it with a nomination. They did give him a well deserved original score nomination though. It was certainly excellent and served the film well.

Perhaps the one omission here was Best Adapted Screenplay. I'm sure it was promoted for Best Original Screenplay, but considering the story reads more like a science fiction adaptation of Dances with Wolves, I'm sure everyone at the Academy laughed that one up quite a bit. Had it been submitted as an Adapted Screenplay, I for one would have been one to happily promote it to Academy members as it was an awesome sci-fi version of Kevin Costner's magnum opus.

In the end, I think Avatar could care less about the awards, as it continues its rise to best selling film of all time (not accounting for inflation), though I'm sure James Cameron and everyone who worked so hard to make one of the best movie experiences in history appreciate the recognition of their labor. When it comes to this year's nominations it's like seeing Dances with Wolves meets Titanic in a Science Fiction dressing. How it all turns out we'll still have to wait and see as the Academy begins their voting process running up to the final awards show in March.

Article continues below the following preview
for my photography book, Natural Raw. Buy it Today!

But there are others

With all the talk surrounding Avatar and the surprise nomination of Up for Best Picture, one cannot ignore such fantastic films as Inglourious Basterds with its eight nominations and Up in the Air with its six and very likely win by George Clooney for a leading role performance (you read it here first, unless I'm wrong and it's Jeremy Renner… but it will definitely be Penélope Cruz for Nine, or is it Meryl Streep?… I think Penélope but this is definitely difficult to predict). The real one to look for is The Hurt Locker which was directed by Cameron's ex-wife and like Avatar, has nine nominations. 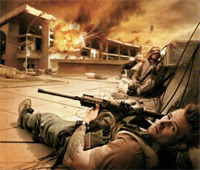 The Hurt Locker, for those who have yet to experience it, is a movie based on the real accounts of a freelance journalist, Mark Boal, during his time as a freelance journalist embedded with a U.S. Army Explosive Ordinance Disposal (EOD) squad (read Bomb Squad) during the Iraq War. It follows the unit's tour together as they deal with all the difficulties of the war, themselves, the bombs, the insurgency, etc. It's certainly one of the year's best films if not the best, for the way the Kathryn Bigelow presents the seemingly familiar subject matter of the Iraq war in a way that really communicates, through the relationship of its three main characters, a very real story about war and having to work in a hostile, unfamiliar, and unfriendly foreign environment and all the hell that stems from it.

It's quite a peculiar battle, that between Avatar and The Hurt Locker, James Cameron versus ex-wife Kathryn Bigelow, Most expensive blockbuster success versus Economical, Indie, Critical Sensation, Science Fiction Fantasy versus Crude Earthly Reality. It's a battle of absolute opposites and one whose outcome will be difficult to predict. The Academy tends to favor films like The Hurt Locker over big budget, effects laden films such as Avatar, but in this case (and there have been a number of exceptions), and with the Best Picture category extended to ten candidates, it's a toss up.

The road to March 7th is definitely an exciting one. Time to start the voting lists and the planning for the Oscar parties! Have your picks already? Sound off!


List of Nominations for the 82nd Academy Awards (click here to open their site in a new window):

Actress in a Leading Role
• Sandra Bullock in “The Blind Side”
• Helen Mirren in “The Last Station”
• Carey Mulligan in “An Education”
• Gabourey Sidibe in “Precious: Based on the Novel ‘Push’ by Sapphire”
• Meryl Streep in “Julie & Julia”

Writing (Adapted Screenplay)
• “District 9” Written by Neill Blomkamp and Terri Tatchell
• “An Education” Screenplay by Nick Hornby
• “In the Loop” Screenplay by Jesse Armstrong, Simon Blackwell, Armando Iannucci, Tony Roche
• “Precious: Based on the Novel ‘Push’ by Sapphire” Screenplay by Geoffrey Fletcher
• “Up in the Air” Screenplay by Jason Reitman and Sheldon Turner


P.S. Can someone explain to me what Transformers: Revenge of the Fallen is doing on this list?